Well, now that I’ve had about a day to try out my new iPhone, I’m ready to give you guys my initial impressions.

First off, my purchasing experience was surprisingly painless. I arrived around 5:20pm on launch day at the AT&T store that’s by Harlem and Irving Park Avenues, just Northwest of Chicago. 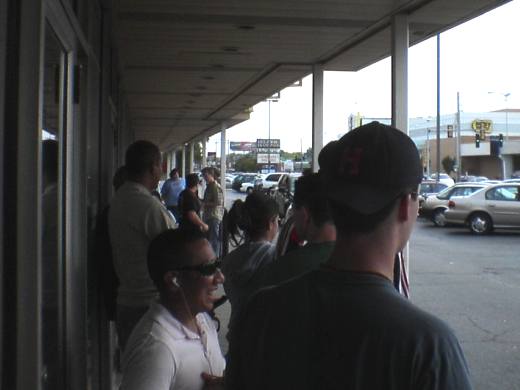 There were about 30 people in front of me in line, so I figured that would be okay. Surely, an AT&T store would have at least 30 of these prized possessions for launch? Well, from what I can tell, they had just barely more than that. I was the second to last one to get an 8GB model, while just 5 or 6 more people scored a 4GB. 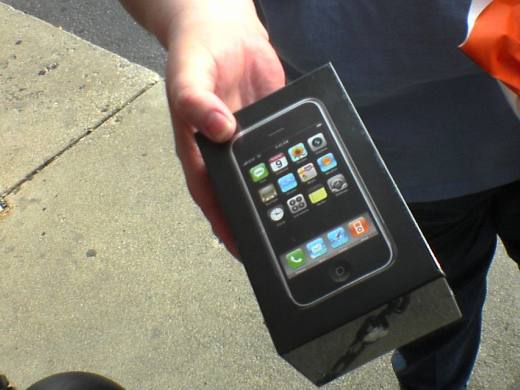 The staff in the store was surprisingly organized, and things flowed smoothly. Given the fact that I was in an AT&T store, and not an Apple store, this was a surprise based on my past experiences. They started letting in about 10 people at 6:00pm sharp, then let us in one at a time as people left with their purchases. I was in the store by 6:25pm and done with my purchase within 10 minutes, tops.

Unfortunately, at least 25 people behind me in line went home without an iPhone. However, the store claimed that they were the fastest way to get one shipped, citing that it would be faster than the Apple Store if they took an order for those who didn’t get one. 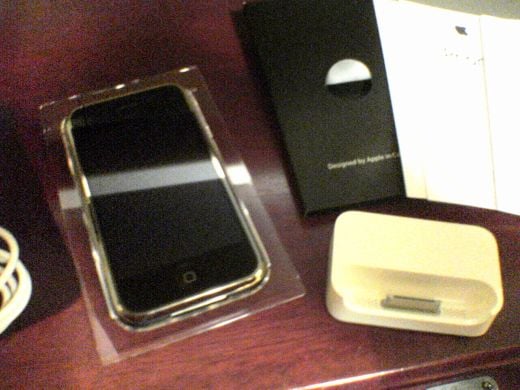 Once I got my phone home, I unpacked it as an eager child would at Christmas time. Inside the small box, there’s the iPhone in a nice acrylic tray, a dock (which isn’t quite the same size as the one I use for my 5G iPod,) a USB to dock-connector cable, a travel power adapter, stereo earbuds with a microphone on the cord, and a guidebook called “Finger Tips”. There’s no comprehensive manual in the box though, so you’ll have to rely on the documentation on the Apple site if want to learn everything there is to know. (FYI, you can download the full user manual here.) 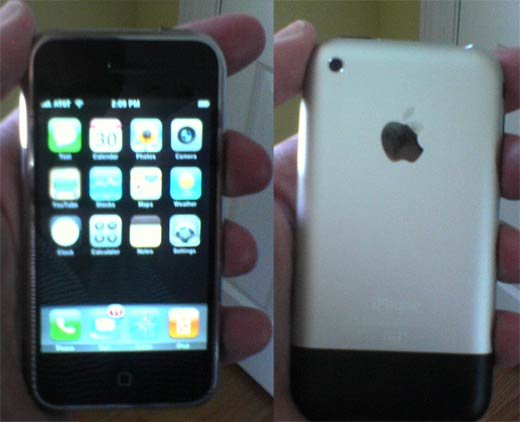 Once you put an iPhone in your hands, you’ll understand much of the hype. Simply put, the phone’s industrial design is stunning. The back of the case is made of a solid matte-finish metal that looks quite durable. A small black door which conceals the phone’s SIM card holder, but all the phones come with a new SIM card pre-installed anyhow. The front features a smoked glass touchscreen with just a single button used for requesting the iPhone’s main menu. Plus, it all comes in a package that’s almost as thin as (and actually slightly lighter than) a 5G iPod. 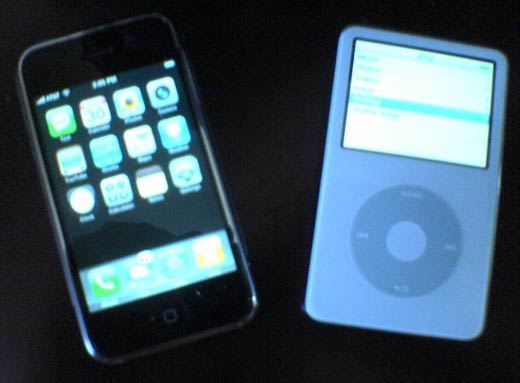 Activation was pretty painless overall. Earlier in the day, I had upgraded to iTunes 7.3, so as soon as I plugged in the iPhone, it was recognized in about 20 seconds, and the activation process started. Since I was an already current subscriber to AT&T, all I needed to do was enter a few key pieces of information such as my current phone number and last 4 digits of social security number to link up the accounts. 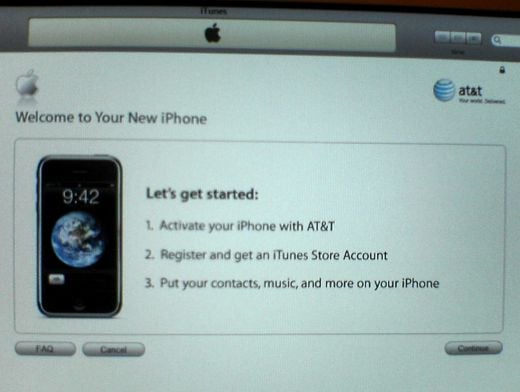 Once I selected a rate plan, I encountered a small glitch. iTunes kept reporting a network error, so I had to retry about 5 times before it would go through. I chock this up to how busy the servers must have been on launch day.

After activation was complete, the iPhone came to life within just a couple of minutes, and I was able to set up music, video, photo calendar and contact sync settings. So far, I’ve only tested syncing of media content, since I plan on using my work computer for calendar and contact syncing through Outlook. Hopefully, that’ll come off without a hitch too.

While in iTunes, I noticed how much space you really get on an 8GB iPhone. According to the software, there’s 7.24GB of available space before you sync up any music, movies or other data. I’m guessing the “missing” 0.76GB is used for pre-loaded data such as wallpapers, ringtones and call history information. 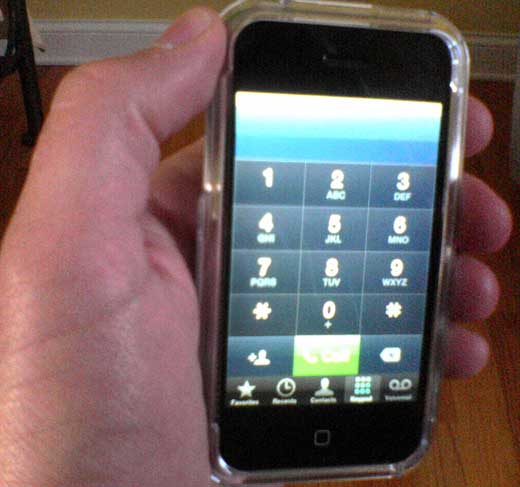 Phone call quality is about average. While it’s a little tinny, it’s no worse than any other mobile phone I’ve had before. The phone’s contact management features are some of the easiest to use I’ve seen, and the phone keeps a great history of all the inbound and outbound calls so you can easily turn them into entries in your contact list. Visual Voicemail is a true marvel. The ability to look at all your voice messages at a glance, listen to them in any order, and fast forward/rewind on screen is a true breakthrough. No more “press 7 to delete,” thank goodness. 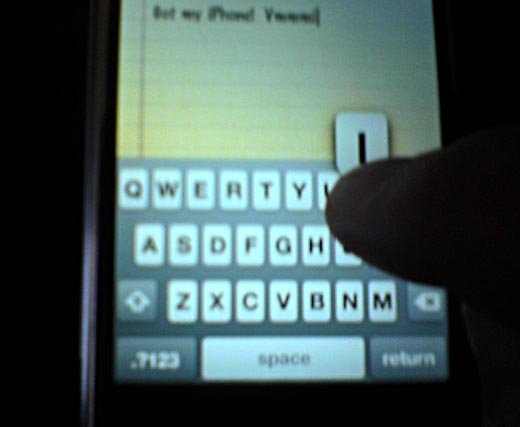 It only took me about 2 minutes to get used to the on-screen keyboard, and I already feel like an old pro. The key to using the touch screen is to press with the middle of your fingertip, not with your fingernail. It seems like it can sense the approximate shape of a finger to figure out where the center point is. I’d say I’m at about 95% accuracy with the keyboard now, but it can be a more bit challenging to hit the mark if you’re in a moving vehicle. That said, you shouldn’t be surfing the web and driving at the same time anyhow. 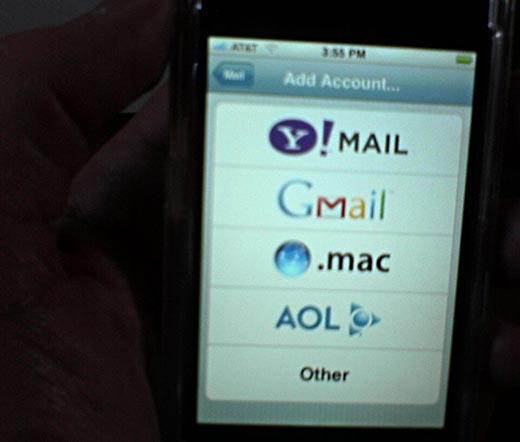 E-mail setup was a breeze for me. We have an IMAP server at work, and I was up and checking messages within a couple of minutes. By default, the phone grabs the most recent 50 messages, but can be set to fetch more or less. You can configure an automatic mail checking interval (every 15, 30 or 60 minutes,) or just check messages on demand. The E-mail application is every bit as good as any wireless device I’ve used. However it doesn’t offer features like message rules. But for quickly reading or jotting off a message, I even think it beats the BlackBerry for ease of use and intuitiveness. And I just love that you can open .DOC, .XLS and PDF attachments right on screen (although landscape mode doesn’t appear to be supported for the document viewer.)

I’ve only played with the other applications a little bit, but I’m pleased with the handy weather and stock widgets, which will grab and update data instantly, whether on a Wi-fi or EDGE network. The Safari browser is very nice, and works well with most websites. I do have to say that zooming in to view sections of the page you want to read takes a little adjustment, especially when your used to having a 24-inch widescreen monitor on your desk. It’s totally serviceable, and miles better than any wimpy WAP browser, though. 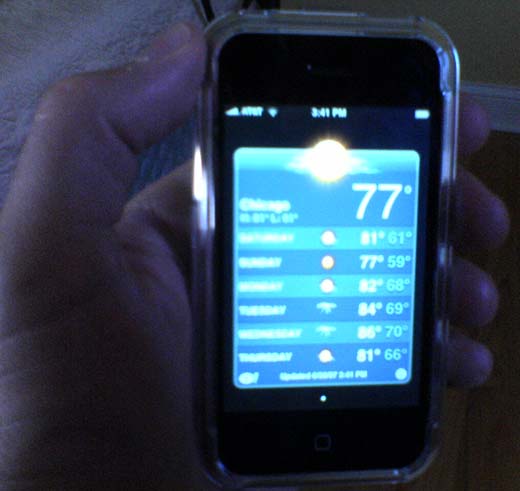 Surprisingly, connectivity on EDGE wasn’t bad at all. I was even able to stream YouTube videos when I was on the road in the Chicago area earlier today. I encountered a little audio sync problem on the low speed connection when compared to my Wi-fi network, but that’s about all. An average web page (CNN.com) loaded in about 6 seconds on a Wi-fi connection and about 10 seconds on EDGE for me, YMMV. I’m really beginning to think there is some truth to the rumors that AT&T made some improvements to their 2.5G network in the last week. Certainly the speeds are totally usable for things like checking e-mail and pulling down Google Maps and directions. Speaking of which, Google Maps load smoothly and being able to search for live business information and immediately generate a map and directions is very handy. 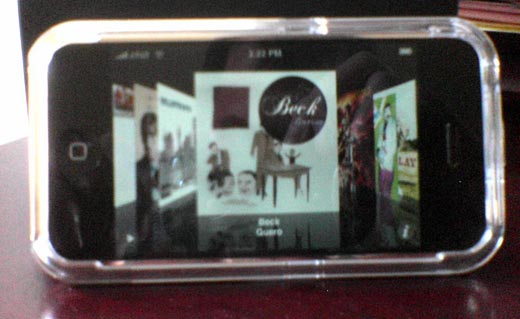 Music and video playback really does live up to the “best iPod ever” tagline. The interface is totally intuitive, and cover flow mode is really well implemented. It’s smooth as butta, and lets you quickly flip between albums and tracks, while looking super cool. Most of the video content I’ve watch so far was via YouTube, which doesn’t deliver the quality that iTunes downloads do, but for watching that Dramatic Chipmunk video, it’s fine. Plus, this is the first iPod you can listen to without headphones or an external speaker. Sound quality is still much better through headphones or a stereo, but in a pinch, the iPhone works in standalone audio mode just fine.

One interesting thing I noticed was that you can’t install any of the iPod games on the iPhone. So in this one area, 5G+ iPods actually beat out the iPhone. A rumored partnership between Apple and Nintendo to release games for the iPhone hasn’t come to fruition yet, but I’m still holding out hope. 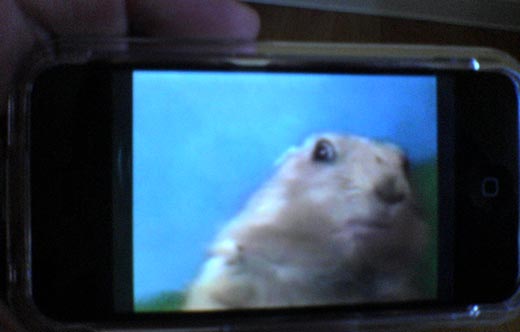 I really only have a couple of minor gripes with the iPhone, and they’re both pretty superficial. First off, it’s a massive fingerprint magnet. The iSmudginator that I showed you the other day really isn’t far from the truth in terms of the volume of greasy prints you’ll have on the device in just minutes. That said, Apple does include a nice microfiber cleaning cloth in the box. I’m also not overly impressed with “multi-touch” portion of the interface at this early juncture. Really, it’s only used to zoom in and out of the screen, and I actually prefer the alternative method of just tapping twice to zoom in. Sure, the “pinch” effect we’ve all seen to enlarge and reduce photos is nifty, but from a usability perspective, it really does nothing for me.

One other issue will probably be solved by case manufacturers. The initial supply of protective cases (that fit well) is very limited. Every case I’ve seen offers little or no protection for the front of the phone. I picked up the Belkin acrylic case which protects the back of the phone, but not the screen, then clips on your belt loop. However, if you’re used to throwing your phone in a pocket or a briefcase, these kind of cases won’t offer sufficient protection. Sure, there are plenty of people saying that the glass screen is extremely durable, but I’d hate to be the one who proves them wrong.

Overall, I’m pretty impressed with my iPhone so far. I’m not saying that it’s perfect. Having no tactile input can take a little getting used to, and I wish that it did have true 3G network support. I also wish that Apple included a memory card slot. I really hate that my crappy old $100 phone can be expanded to have more memory than the iPhone has. Its high-end design glass and metal design is gorgeous, but I’m used to having a phone you can “trash around” in your pocket. That said, I’m concerned that over time it it might not hold up to real-world (ab)use. Here’s hoping I’m proven wrong on that front.

There’s no denying that the iPhone is one cool gadget. I was able to do things with it that I could never do effectively with my old phone. Sending and receiving e-mail is as easy as using any desktop application, and the Google Maps and instant weather features are totally awesome if you travel a lot like me. I also appreciate being able to go to any website I want, without the barriers that most mobile phone browsers put in the way. Plus, I’m able to get rid of three devices in my briefcase now. Before this weekend, I had an iPod, a Pocket PC and a mobile/data phone. Now, I’m down to one.