Egg Shaped Fridge is No Yolk

For some reason, this mini desk refrigerator makes me think of the spaceship from Mork and Mindy. [I’m (carbon) dating myself, I know.] Actually, it’s supposed to be a giant egg. Come to think of it, so was Mork’s ship. 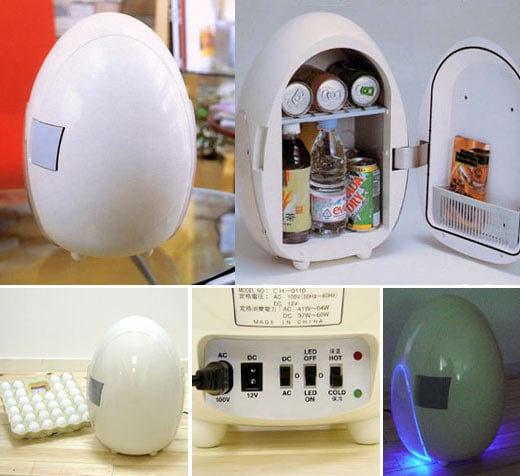 The freshly hatched EGG LUTT refrigerator is perfect for keeping your brewskis and other snacks nice and cool. The fridge also has a warming mode if you want to keep something warm. They suggest hot towels — “Honey, bring me a hot towel!” It’ll even run on 12VDC power so you can run it from your cigarette lighter outlet on the road. “Honey, this traffic sucks. I could use a hot towel.”

There’s just one thing standing between you, a cold beer and a hot towel. These things are only available in Japan at present. So you can only hope that it won’t get cracked or scrambled during shipment. OK, I’ll stop now.