A few weeks back I told you about an “air guitar” gadget that let you strum in the air holding on to what looks like just the neck of the guitar. Now, this new toy from Japan goes one better, completely eliminating the guitar and just leaving the pick. 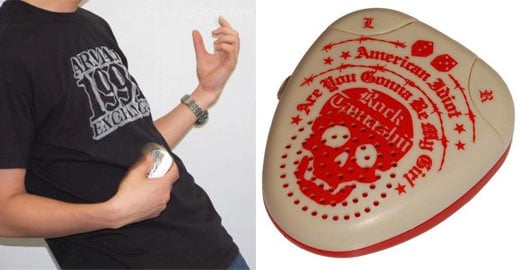 The Rock Tamashii is a rather cumbersome looking, oversize guitar pick with a built in speaker. As you “strum” the pick rhythmically, the music plays.

Each one comes pre-loaded with a couple of rock numbers that you can jam out to. There are currently four versions of the pick, including such tunes as Aerosmith’s Walk This Way, The Rolling Stones’ Satisfaction, and Green Day’s American Idiot among others.

Rock Tamashii guitar picks are available for pre-order for $15 each from HimeyaShop.