This new wireless streamer from Freecom lets you listen to thousands of free internet “radio” stations anywhere in your house. 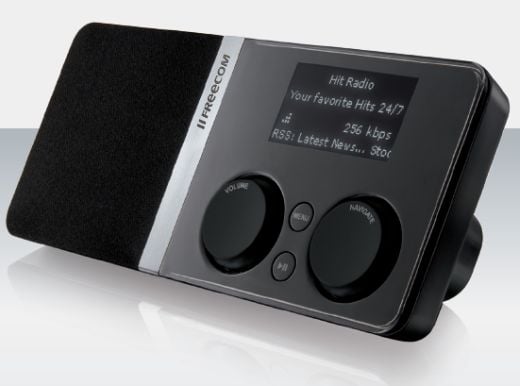 The Linux-based MusicPal not only receives over 5,000 ‘net music streams, it can also stream MP3s directly from your networked PC or Mac. Since the MusicPal has built-in 802.11b/g Wi-Fi, you won’t need to run any wires to it either (although there is an Ethernet port if you’re wired.)

For sound output, you can either use the small, built-in speaker, or you can hook it up to your stereo via RCA jacks. My favorite feature has to be the ability to subscribe to RSS feeds and view them on the display. Now that’s cool! It’s even got a built in alarm clock so it’s a perfect bedside companion.

The best part is that it’s very reasonably priced. The MusicPal is available for pre-order from Freecom’s US online store for just $139 USD. They’re expected to start shipping this August.