The License Plate Frame That Could Save Lives

How many times have you been driving down the road, when some dufus in front of you slams on their brakes to take an “important” phone call or yell at the kids? If only that guy would install one of these on his car. 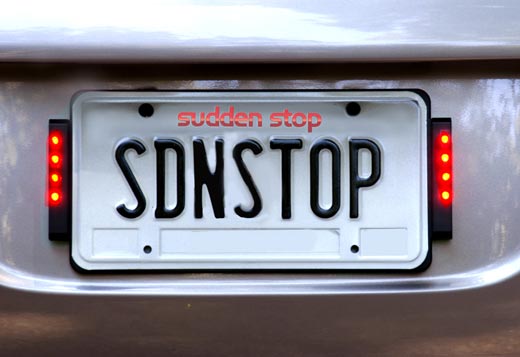 The SuddenStop is a high-tech license plate frame with motion sensors built into it. It calculates the G-force of the vehicle it’s mounted on, and if your braking force measures more than 0.7Gs (normal braking produces around 0.3Gs,) it immediately flashes super-bright LEDs to alert the driver behind them. This extra warning could seriously reduce the likelihood of accidents, since it might give drivers just a little more advance warning that something is wrong in front of them.

The $29.99 purchase price seems like a worthwhile investment if you don’t want to be rear-ended, but it’s too bad they haven’t invented something you could put on the front of your own car to detect the deceleration rate of the car in front of you. That way, you’d be protected from not just the handful of cars with one of these, but from all the people who don’t bother to buy one.

Seriously, this is a good idea, and maybe auto manufacturers will think to license (no pun intended) the technology to incorporate into their own vehicles.