IPhone Battery Replacement on the Cheap 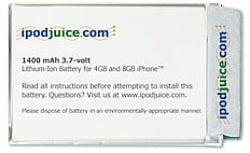 While Apple is offering a service to replace batteries in the iPhone when they eventually wear out, there’s no question that the service is a quite expensive, costing $79.95 plus shipping.

Now, the first (of what will no doubt be many) third-party battery replacement services is offering Apple some competition. ipodjuice.com will take care of replacing a dead iPhone battery for just $45. That’s more than 40% cheaper than Apple’s price. They list the battery itself at $25, but do not offer a self-replacement option due to the complexities of the procedure.

The batteries offer the same 1400 mAh, 3.7-volt specifications as Apple’s OEM version. Not only that, ipodjuice guarantees their replacement batteries for ten years from the date of purchase. The company also claims that they’ll replace the battery on the same day they receive your iPhone and get it shipped back out later on the same business day.

Keep in mind that the $45 price does not include shipping the iPhone to ipodjuice. They do offer an option which includes shipping to and from their service center, but that total fee is $65.