The Sights and Sounds of the Islands

Picture yourself lying on the beach, listening to the crashing waves, soaring seagulls and the squawks of far-off dolphins… Now you can bring a bit of that feeling inside your house, thanks to this new gizmo from Japan’s TakaraTomy. 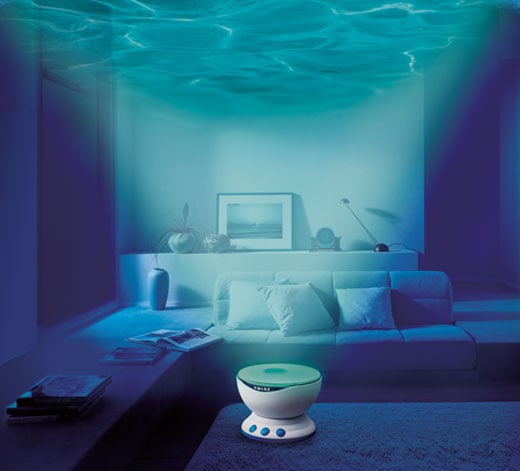 The Healing Theater Umine projects watery blue and green moving images on your ceiling as it plays back digitally recorded sounds of the islands. In addition to a beach setting, the Umime can transport you deep into the rainforest along with chirping birds and a green, leafy light show, or under the sea, swimming with the fishes and a deep blue visual effect.

In addition to the built-in nature sounds, you can hook up your favorite media player and listen to your music as the images play. It also comes with a removable frosted dome that lets keeps the images from reaching the ceiling, instead creating a brighter, point lighting source.

As is always the case with the LED projectors, the effect requires a totally dark room, and probably won’t be quite as dramatic as the marketing image above. Still, it looks pretty cool. The Umine projector is available for pre-order now (shipping mid-August) from HimeyaShop for $84.