This weird camera from Japan can meow. Presumably, the camera makes cat sounds to draw the attention of your elusive feline friends when you want to snap their picture. 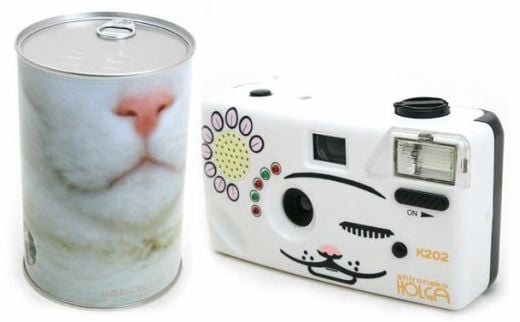 The whole idea strikes me as pretty odd though. I think if my cat heard the disembodied, digitized meows, then saw the flash go off, he’d take off like a shot. I actually think opening the metal can that it comes packed in is more likely to attract cats, since they’ll think you’re fixing their bowl of 9-Lives. Of course when kitty realizes that there are no tasty morsels, just a stupid meowing camera, Mr. Whiskers will probably scratch your eyeballs out, thus making it impossible for you to take that picture you bought the thing for in the first place.

So if you’re still interested after all that, you can find these over on Korea’s 10×10 shop. With a little digging, you can also find a handful of ’em over on eBay.