Pioneer 5.1 Home Theater Does Away With Receiver Box

The latest surround sound system from Pioneer gets rid of the typical “receiver/amp” module that most home theater systems require. From what I can tell, they’ve hidden all the amplification and hookups inside of the subwoofer. 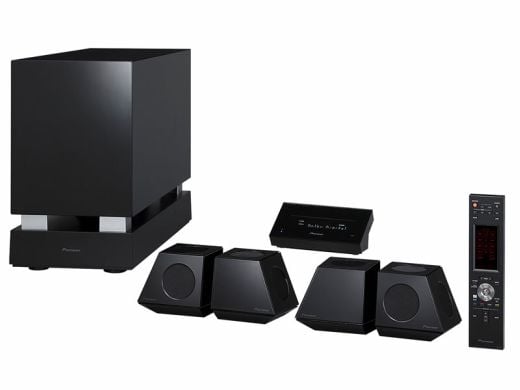 The Pioneer HTP-LX70 system features a standalone control “pod” which has a bright backlit display that shows the current input and other settings. It’s got full support for the latest surround technologies, including Dolby TrueHD and DTS-HD master audio as well. It’s also got a special 3D spatialization technology which is said to provide some serious soundfield expansion.

The system has 400W of total power, driving the left, right and surround satellites at 50W each, but adding dual drivers to the center and subwoofer channels, so they each get 100W of amplification. Pioneer also opted to split the center channel in half, so you don’t have to try to fit the speaker under or over your television. I’m not sure what this means for center channel imaging, but I think that’s part of what they’re trying to accomplish with the 3D sound feature.

I like that this system offers three HDMI 1.3a ports, making it easy to hook up and switch multiple high-definition sources. The HTP-LX70 is definitely at the “high-end” of the Pioneer price range though, within a retail price of ¥261,000 (about $2200 USD.)