A while back, I told you about some fun speakers for dog people. Now, feline fanatics can get in on the action with these cat-inspired desktop speakers. 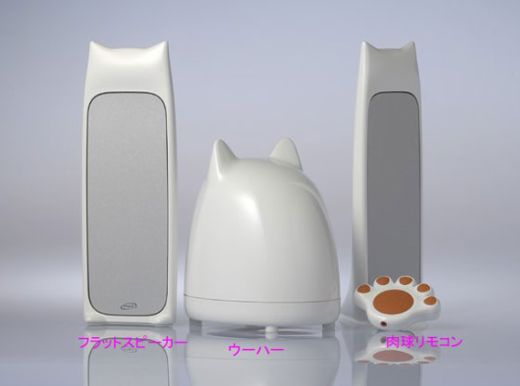 Brighton Net’s CatSpeaker set is a full 2.1 channel amplified speaker setup, complete with cat-shaped subwoofer and satellites. The speakers use NXT flat panel drivers, which I’ve been pretty impressed by in other systems, so I actually think it’ll have decent sound.

My favorite part of the system has to be the cat-paw shaped control pod. The individual paw pads each control the system’s equalization effects.

The system will retail for ¥19,800 (about $166 USD) when it’s released later this year. I don’t know if the CatSpeaker system will be available outside of Japan, but I’ll let you know if I hear anything.