Rollei has been making cameras for almost 90 years. Now you can own one of their classic models from the 1920’s, updated with some 21st century technology under the hood.

The Rolleiflex MiniDigi looks virtually identical to Rollei’s original Twin Lens Reflex cameras, with a decidedly modern spin. As its name indicates, the MiniDigi isn’t quite as bulky as its larger film ancestors. Instead of snapping your shots to film, the Mini records 3.1-megapixel digital images (hopefully, they’ll upgrade this to a higher resolution in future.) 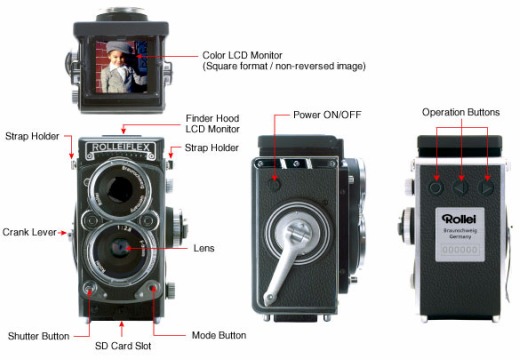 Like the cameras that inspired it, the Mini uses a top-down viewfinder. It’s even got a “crank” on the side that advances the camera to the next picture. The camera can also capture video clips and offers expandable memory via an SD slot.

If you’re shopping for one of these, be sure that you order the new 3.1-megapixel version, since there was a 2-megapixel version out there for a while too. I found the newer model over at WolfCamera for $199.