It was bound to happen sooner or later. Every cool looking electronic device, from the Apple iPhone to the Sony PSP eventually gets its case design copied, usually with some sort of unrelated junk stuffed under the hood of the doppelgänger. The latest victim of such identity theft is the immensely popular Nintendo Wii-mote controller. 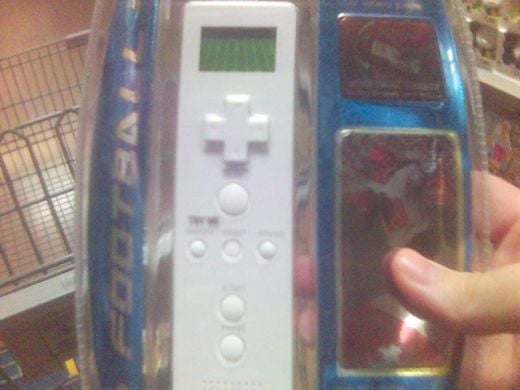 Greg from 4 color rebellion was poking around his friendly neighborhood Wal-Mart store and came across this gem of a product. From what I can tell, it’s a cheezy electronic football game that just happens to look a whole heck of a lot like a Wii controller. I’m sure no parents will accidentally pick up one these for their kids, right?

For some reason, I’m betting this game doesn’t feature any of the advanced motion-sensing abilities of the controller that inspired it. Regardless of its functionality, I’m sure the intellectual property attorneys over at the Big N will have a few things to say about the design.