Jabra, known for their wireless Bluetooth headsets, has revealed this unique wireless headset that can go from being worn as a pair of headphones, to a portable stereo system with just the flick of your wrist. 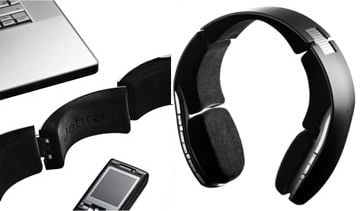 The $235 Jabra BT8030 headset not only works as a wireless Bluetooth headset for your media player or mobile phone, it can quicly transform into a pair of speakers for your computer or as a speakerphone. As a headset, you’ll be able to chat away for about 32 hours on a single charge, and in speaker mode, you’re looking at about 26 hours, depending on volume level. You can also pair multiple devices at the same time, so if your MP3 player and mobile phone are separate, that’s fine.

Seems like a pretty cool idea to me. I just hope that Jabra has provided some safeguards to prevent you from blowing your eardrums out while their being worn as headphones.