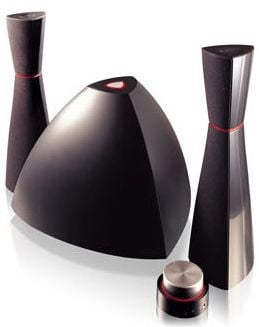 If you’re in the market for some dramatic looking speakers, and can’t afford the $50k radial loudspeakers I told you about yesterday, you might want to check out these ones from Britz. They may not be the biggest or most powerful speakers out there, but they sure look purty.

The Rosetta speakers come in a 2.1 configuration, with two satellite towers and a downward-firing amplified subwoofer. They feature a striking modern case design with sleek curves and cool red LED illumination throughout. Like many other 2.1 systems these days, they feature some sort of virtual surround technology (in this case IHSS: Independent Harmonic Surround Sound), but in my experience, most of these just add a general sense of depth to the soundstage, but nothing resembling true surround sound (Yamaha’s innovative YSP series excepted.)

Keep in mind that the Rosetta speakers are best designed for use with computer or video gaming setups, since they’re not all that big. The twin speaker towers measure about 3″(w) x 11″(h) x 3.5″(d) each, while the subwoofer measures about 10″(w) x 8″(h) x 11″ (d). Amplification isn’t anything to write home about either, with the satellite towers running at 9-watts per channel, and the subwoofer delivering just 32-watts of power.

The complete Rosetta 2.1 speaker system retails for just 85,000 Korean Won (about $90 USD) and is available from The Earlyadopter’s World.