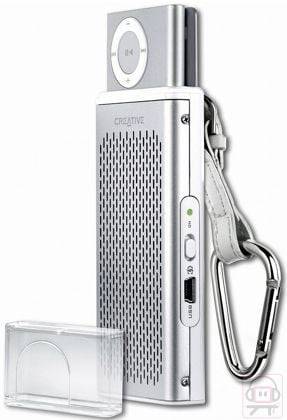 Just dock your 2G Shuffle on the top of Creative’s new Travelsound i50, snap on the clear protective cover and you’re ready to go. The compact speaker has a nifty carabiner-like loop that lets you clip the speaker onto your backpack or belt loop. Plus, it’s got a built-in rechargeable battery which can be charged through a USB port.

The Travelsound i50 is currently available in Japan for ¥7,980 (about $69). A release date and pricing for other countries hasn’t been announced yet, but given Creative’s worldwide track record, it’s only a matter of time.