A while back, I told you about a little solar system clock from Japan. It didn’t accurately represent the positions of the planets or anything but the time of day (and I’m not even sure it did that right). If you’re looking for something with a bit more accuracy and substance, you might want to check this out. 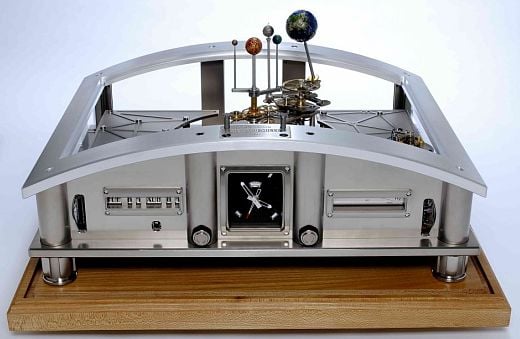 The guys over at Watchluxus have turned me on to this amazingly intricate mechanical device which demonstrates the workings of our the Solar System in unbelievable detail. Richard Mille’s Planetarium-Tellurium provides a glimpse into the exact positions of the Earth, Venus, Mercury, the Sun and the Moon. 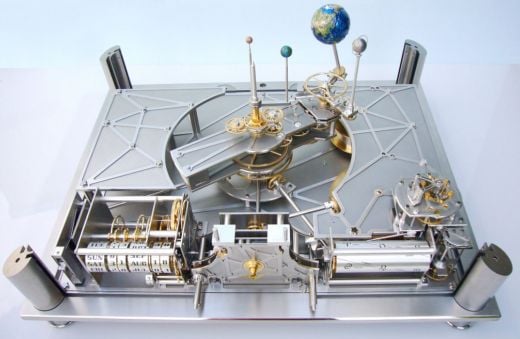 While it might not include all of the planets, and the Earth has been enlarged for aesthetic reasons, it’s capable of telling viewers an astounding amount of information including the current axis of the Earth, it’s position relative to the Sun, the rotation of the Moon, as well as the positions of Venus and Mercury among other things. It’s also an extremely sophisticated clock and perpetual calendar, which can even tell the current signs of the Zodiac.

Mille enlisted the counsel of a renowned astronomer-physicist to help with all of the calculations that were needed in order to accurately convert these movements into a mechanical system. To put the precision into perspective, the least precise calculation is the current axis of the Earth, which can get off by plus or minus 1° every 7.7 years. Most of the other calculations are far more stable, like the rotation of the Earth around the Sun, which should be accurate within 1° for up to 2 million years!

From what I’ve been able to glean, Mille actually plans on producing these clocks for purchase, although I haven’t been able to find out any details on that yet. Given the insane amount of detail and fine craftsmanship, I’d expect that you’d be able to buy a really nice car or a small condo for less than what these will ultimately sell for.