Sony Japan has just announced a number of new flat-panel LCD televisions in the BRAVIA line. The W5000, V5000 and V3000 series come in sizes ranging from 40 to 52 inches. 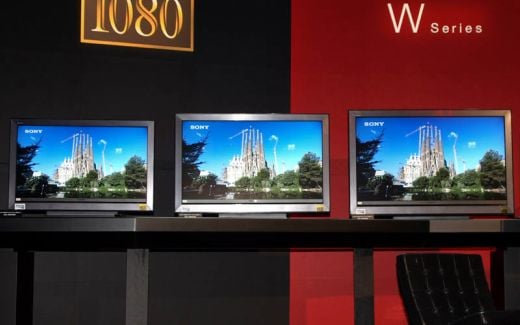 All of the models feature a full HD 1080p 10-bit LCD panel. However, the W5000 series gets a wide gamut backlight, x.v.YCC color, and MotionFlow (120Hz refresh rate to reduce motion blur.) In addition, the W series offers dual analog and digital tuners, while the V series only has a single tuner. The only other significant difference is the number of HDMI ports. The W5000 and V5000 sets have three HDMI inputs, while the V3000 sets have only two.

From what I can tell, the cosmetics for all the models are identical. There’s no word on release dates outside of Japan yet, but in all likelihood, we’ll see these displays worldwide in 2008.