If you’re a regular reader of Technabob, you probably know that I’m a big fan of LCOS (Liquid Crystal on Silicon) based projectors. In terms of image quality, contrast and lack of visible pixel structure, they’re second only to good old CRTs. 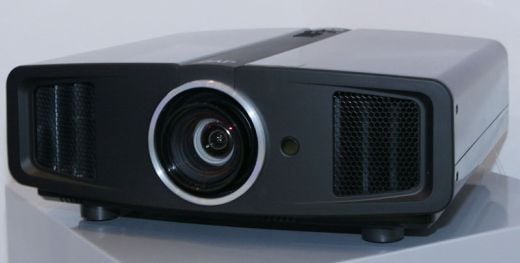 At this week’s IFA show in Berlin, JVC revealed their latest entry into the LCOS arena (JVC uses the brand name “D-ILA), the DLA-HD100. The new projector replaces the popular DLA-HD1 model which came before it. The HD100 significantly improves upon the contrast of the prior model, with JVC claiming a 30,000 to 1 ratio. They’ve also added motorized zoom and focus capabilities, which the HD1 didn’t have.

JVC also has improved the color rendition of the projector over prior models and added HDMI 1.3 Deep Color support too. As was the case with the HD1 before it, the HD100 features Full HD 1920×1080 (1080p) native resolution, for the sharpest images possible.

The DLA-HD100 will be released worldwide this November. Pricing hasn’t yet been finalized, but if you’re thinking about buying a front projector, you might want to wait a couple of months.