From the separated at birth file comes this digital video recorder from China’s Magnetox, which looks more than a little like Apple’s Mac Mini computers. 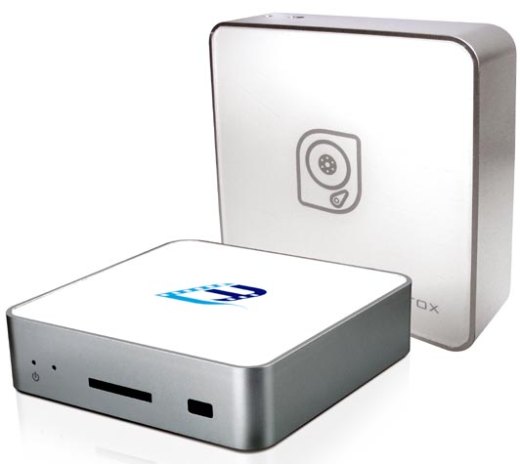 The Magnetox V120 features the same white and aluminum accented case design as Apple’s popular compact computer. But the Magnetox V120 is a dedicated media recorder/player designed for use in your living room, so it has more in common with the AppleTV than the Mac Mini.

The little box features hardware MPEG4 playback and recording, and can automatically convert recorded video for playback on your TV, PC, iPod, PSP, GameBoy Micro or mobile phone. To keep its svelte profile, there’s no storage device built-in. Instead you can either record to an SDHC card or to an add-on IDE hard drive if you pick up the matching B200 USB hard drive enclosure.

Similar to the AppleTV, the device can only handle standard definition content, but unlike Apple’s device, the V120 can actually record television programs thanks to a built-in tuner. It’s not clear to me if this is a traditional UHF/VHF/CATV or a digital tuner though. I’d gamble that it’s of the analog ilk. There’s some date and time based scheduling capabilities, but no program guide, which is unfortunate.

Since the V120 is a full-fledged media player it can handle audio playback in MP3, WAV, WMA and AAC formats. There’s also a photo album viewer for JPG, PNG or GIF images.

You can find the Magnetox V120 from Hong Kong exporter GoldenShop for just $179 USD. Be sure to specify whether you want the NTSC or PAL version.