Apple 9/5 Event to have Madonna Connection?

There’s been all sorts of buzz and speculation going on about what iPods and iTunes news will emerge at Apple’s big dog and pony show tomorrow, but one odd tidbit popped up onto my radar screen today that I was a bit surprised by. 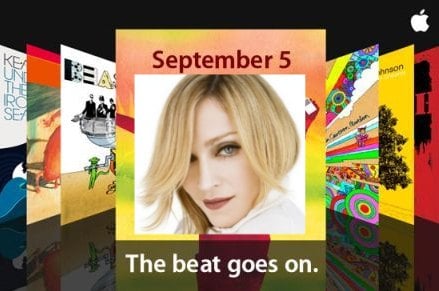 You see, Apple’s invitations for the event is titled “The Beat Goes On”. For weeks, people have been trying to decode what it meant. Was it a reference to the old Sonny & Cher song, was the Beat indicative that Apple had secured the elusive Beatles catalog or was it something else altogether? Well, I’m sorry to disappoint those speculators out there, but it looks like that title could be a reference to an entirely different Lady Madonna than Beatles fans had in mind.

Yep, it turns out that Madonna’s upcoming album (which was recently leaked onto the Web) also happens to be titled “The Beat Goes On.” Methinks I smell more than a small coincidence here. So instead of a huge catalog of classic tracks from John, Paul, George and Ringo, we’ll probably be getting some cheezy new pop songs from the original Material Girl? Only time will tell, but I’m definitely leaning in that direction. If that’s the case, all I can say is “yawn.”

Thank goodness we’ll have some hot new iPods to keep us distracted.