The guys from online shop MyVirtualZone just tipped me off to these little playthings. The appropriately named Laser Top has a little laser beam that projects out of the side as you spin it around. 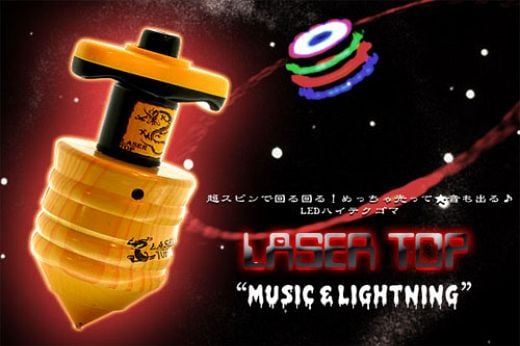 While I actually think the effect of the LEDs and the laser are pretty cool when its spinning, I think that the music that plays as it goes is about as ridiculous as it gets.

For some odd reason, they decided to pick the Harold Faltermeyer “classic” Axel F from the 80s hit Beverly Hills Cop. I’m not sure if there was some misunderstanding that it was from Beverly Hills Top, but either way music would drive just about anyone up the wall after about 30 seconds.

Regardless, it is kind of a fun little toy, and when you put a laser beam on just about anything it instantly becomes about 10-times cooler. So get spinning and pick one up for just $5.95 here.