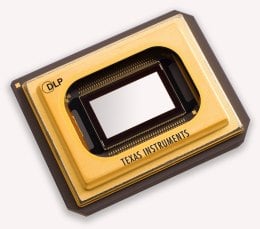 Texas Instruments today took the wraps off their latest DLP chipset (the “It’s the mirrors…” projection engine). TI claims the new DarkChip 4 chipset improves the contrast ratio over the previous series by 30% or more.

TI plans on demonstrating the improved image quality at this week’s CEDIA home theater expo on a 3-chip 1080p projector capable of a 15,000 to 1 native contrast ratio. They also will be showing a demonstration of an LED-illuminated television that can crank out contrast as high as 100,000 to 1.