The folks over at ezGear were kind enough to send me a pair of their $299 ezVision Video Glasses to put them through their paces. The glasses are designed to produce the illusion of a big screen television, but are small enough carry around in your briefcase or purse. 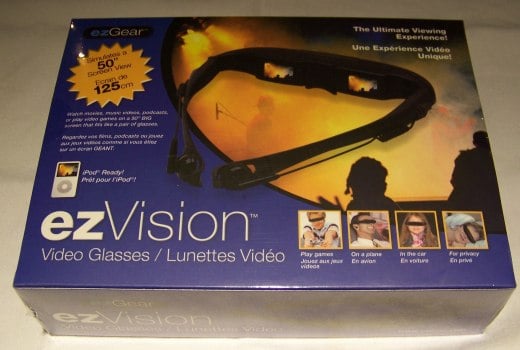 By sticking two tiny LCD screens in front of your eyeballs, the ezVision glasses trick your brain into thinking you’re watching a 50-inch screen from about 8.5-feet away. I managed to give these a whirl this week and thought I’d share my experiences. While they definitely give you the sense that you’re watching a much larger screen than, say, the tiny one on your iPod, you can’t expect the picture quality you’d get from a $1500+ high def television. 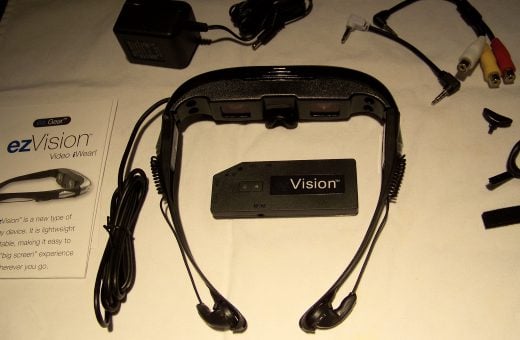 The glasses are made primarily from black plastic, but felt pretty sturdy overall. They then attach to a lightweight rechargeable battery pack which slips easily into a shirt or pants pocket. This little box also serves as the connection point for your video and audio inputs. Battery life for the Lithium Ion power pack is rated between 8 and 10 hours on a full charge, which should be more than the life of most portable sources you’d use with them. For audio, the ezVision has a pair of built-in stereo earbuds that conveniently stow into the ear rests when not in use. Sound quality was as good or better than the stock headphones that came with my iPod and iPhone.

There’s no question that the glasses make you look a bit like some sort of space alien (or just a dork), but they’re surprisingly comfortable. I could definitely see myself being able to wear these for several hours (as long as I wasn’t moving around). The goggles can even fit over a pair of eyeglasses with ease. As a matter of fact, if you wear glasses, you’ll need to keep them on if you want the image to remain in focus. 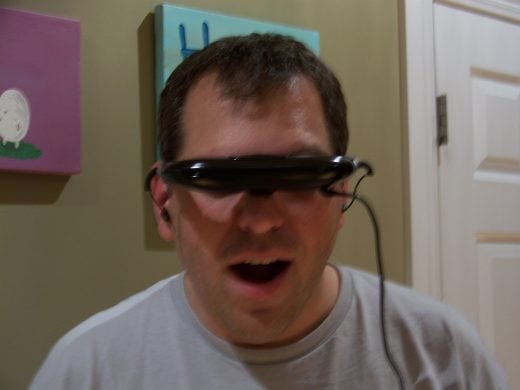 In my tests, I tried out several sources, including a Toshiba DVD player and a Nintendo Wii. I’m sure a video iPod would be a great companion too, but since my iPhone doesn’t support video out, I couldn’t try that as an input source. Video quality was pretty consistent across devices, but limited to composite video sources. It took me a few minutes to adjust my eyes to the displays, but once I did, the experience was pretty immersive. Screen resolution definitely took some getting used to, since I’m accustomed to watching a razor-sharp 1080p HDTV. The standard ezVision glasses only run at QVGA (320×240) resolution, so when you blow that up to the equivalent of a 50-inch display, the scan lines and pixels become extremely prominent. I also wish there were adjustments for brightness and contrast as I thought the images looked a little washed out. They definitely performed best in a dark environment, as external light sources sometimes glared off the screens a little bit.

Despite the image quality concerns, I’d still have to say I’d love a pair of these the next time I’m on a long flight. Once you get used to them, you’re definitely able to shut out the rest of the world. And isn’t that exactly what you want to do when stuck on an airplane for hours? In addition to the ezVision model which I got to try out, ezGear offers a newer model called the ezVision 4X. That model offers four times the resolution of the ezVision (640×480), and gives the illusion of a 60-inch display. Chances are the extra $100 for that model would be worth it to get the significant bump in detail.

For more information, or to order the ezVision or ezVision 4X check out the ezGear website.