Pong Arcade Machine Up for Bid

Here’s a rare find over on eBay. It’s an early PONG machine, circa 1973. The game was made by SYZYGY for Atari. The machine is in surprisingly good condition for an arcade game made nearly 35 years ago. 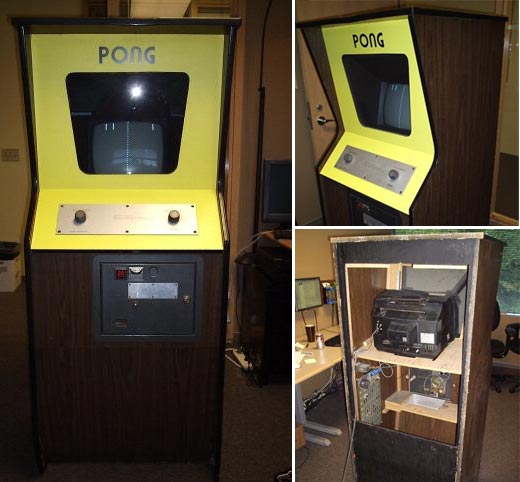 Sure, there are some nicks and dings on the cabinet, but that’s what’s gives it some charm. According to the machine’s internal mechanical counter, it’s had just over 12,000 plays (which works out to about one play a day over the course of its life). I had no idea how cheezy the innards of these systems were, but I guess that’s how they built ’em.

The seller opened up bidding for the auction at just $1.20 (based on the original .25 cents per game adjusted for inflation). Now we all know it won’t sell for anywhere near that price (bidding is already up to $355, and the auction doesn’t end until September 18th.)

If you want to own a real piece of video game history, this is definitely worth a bid. The machine is located at the Microsoft offices in Redmond, WA, so if you happen to live in the Pacific Northwest, you’re in luck. Otherwise, shipping this thing is possible, but definitely a challenge.