The gaming world is full of MMORPGs, games that feature interaction of hundreds or thousands of players. However, these games usually don’t put them all in the same place at the same time, and don’t have hundreds battling each other at the same time. Because of bandwidth constraints (especially upstream), it’s been impossible to pull off high speed games like first-person shooters and racing games that have more than about 16 or 32 simultaneous players without severe lag problems. 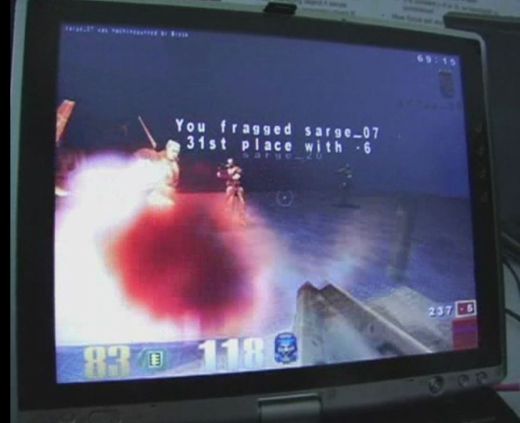 Now Microsoft Research is working on a solution to this problem. The project, codenamed “DonnyBrook” is developing a system that enable FPS games to have hundreds of players duking it out on the same map at the same time.

The way they pull it off is by calculating the handful of players that you have a tendency to focus on (as well as things like frequency and recency), and only update every frame of those players’ data. For players that you’re not “paying attention to”, the data updates less frequently. The players that you’re not focusing are simulated locally by a “bot” with AI that’s influenced by those players movements. As soon as you start paying attention to those other players, the data updates more frequently for them as well.

At this point, it’s just a research project, but hopefully the tech will find its way into some commercial FPS in the future. There’s a little more detail on how it all works in this presentation.