Annoying Neighbors? Take ‘Em Out With This Paintball Tank

(Sub)urban warfare has a new face, and it goes by the name of Paintball Panzer. The pint-sized tank has a turret-mounted paintball gun which lets you fire rounds of paint ammo while keeping you safe and sound from the tomatoes and eggs which may be thrown at you in return. 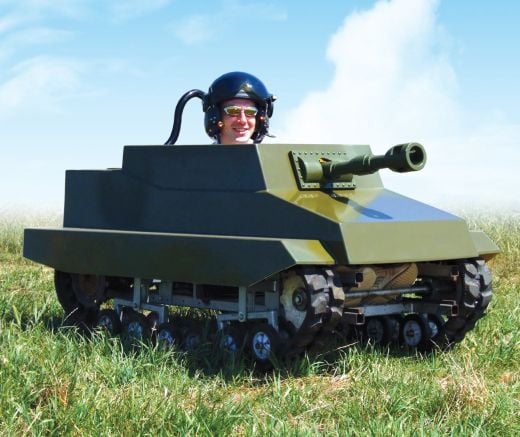 The Funtrak Mini Paintball Tank is a scaled down version of a real tank, featuring a motorized drive system, and a tread drive that lets you maneuver through the roughest backyard obstacles. It’s got a built-in roll cage and engine firewall, and is actually certified for use on the road — in the UK, that is — I have a funny feeling that they wouldn’t let one of these on the street here in the States.

Just like the real world, phony weapons comes at a hefty price. The Paintball Panzer will set you back £8,000 (about $14,400 USD). Each tank is custom built, so you might have to wait up to three months to get yours.