The latest in Yamaha’s series of “Digital Sound Projectors” takes the critically-acclaimed virtual surround technology found in their larger YSP series and shrinks it down to a box that’s just 24-inches wide. (The full-sized models are around 40-inches wide). 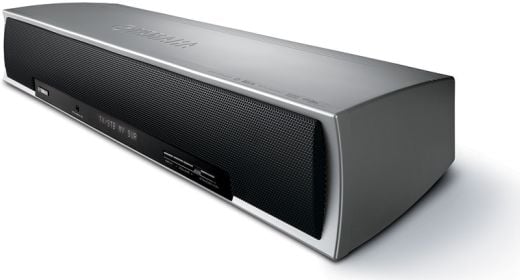 The YSP-500 reflects sound from 18 individual sound drivers to deliver truly immersive surround with only a single box. Just like it’s bigger siblings, the box has all the requisite digital and analog inputs for DVD players and other audio sources.

It can decode Dolby Digital, DTS, Dolby Pro Logic II and DTS Neo:6 sound formats. It also offers SRS TruBass enhancement for the low end of things, but you’ll really want to supplement this system with a subwoofer if you really want a solid bass boom. As has been the case with all but the earliest YSP systems, this one includes IntelliBeam automated room calibration, so you you can get up and running with optimal sound in just a few minutes.

Keep in mind that while the surround effect from YSP speakers I’ve tested is pretty amazing, it’s best experienced in a room that has four normal walls, so sounds can be bounced off of surfaces appropriately. From my experience with the original YSP-1, odd-shaped rooms can be a bit of a challenge.

The YSP-500 should hit stores in Japan later this month for about ¥75,000 (appx. $647 USD), making it significantly less expensive than the larger models in the series. Expect to see these stateside within a few months of their Japanese release date.