Sony’s PlayStation 3 console has certainly faced its share of challenges in the market. When it hit retailers last year, it cost as much as $600, and had virtually no original gaming content. Sure, it’s got a great Blu-ray disc player, and it looks slick, but without games, few people drank the Sony Kool-Aid. Sony’s latest hope in the console race is a new model that trims out some of the “fat” to get the price more in line with the competition. 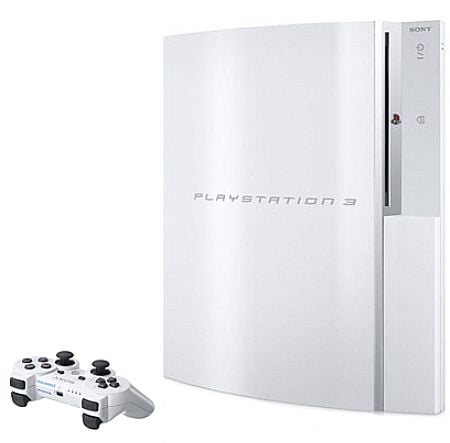 The upcoming low-end PS3 sports a 40GB hard drive, and does away with all backwards compatibility with the PlayStation 2 library. Sony also killed the memory card slots, dropped down to just 2 USB ports, and removed support for SACD playback. Thankfully, Sony kept the built-in Wi-fi, which I was concerned would also be eliminated. Since I’m an owner of an original 60GB PS3, I know I’d miss the backwards compatibility. But then again, Sony already crippled this feature with the newer 80GB model, so it’s already pretty much gone as far as I’m concerned.

One big surprise is that the new console will be available in a ceramic white case design, as an alternative to the fingerprint-magnet gloss black of the original PS3 SKUs. (A shiny black model will still be available as well). Maybe Sony thought that since both the Xbox 360 and Wii come in white, that might be a luckier color than black.

The new models will ship day-and-date with the new DualShock 3 controller, which adds vibration feedback. Unfortunately, it looks like the new console won’t ship with the new stick, and instead will get a standard SIXAXIS model. How odd.

The 40GB PS3 will hit stores in Japan on November 11th (for the equivalent of $341 USD) and hopefully we’ll see them in the U.S. sometime soon.