When it comes to the iPhone’s slick user interface, I guess imitation is the sincerest form of flattery. Case-in-point: this new application for Windows Mobile devices which mimics, and actually improves upon the iPhone’s touchscreen keyboard. 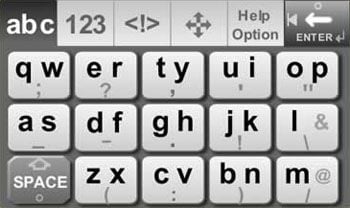 While TouchPal isn’t identical to the iPhone’s keyboard, it’s definitely more than reminiscent of Apple’s interface design. TouchPal’s QWERTY keyboard offers two characters (and punctuation marks) on each key, rather than the single character on the iPhone. This allows for easier typing with large fingers, or even with your thumbs. Simply click on a key, slide to the left, right or down to select the character, or let auto-completion finish words for you with a single click of the key.

By incorporating a intelligent word-prediction system, the software claims typing speeds up to 300-characters per minute, and it really looks possible judging from the video clip above. I really dig the “associated word” capability which lets you quickly chose variants on a particular word stem.

The software works on all touchscreen Windows Mobile devices (version 5 or 6), and supports both VGA and QVGA screen resolutions. And there’s no reason not to try it out. TouchPal’s maker, CooTek is offering a free download of the software through December 8, 2007. After that time, TouchPal will retail for $19.98.