Keyboard Folds in Half to Fit in Overhead Bins

Here’s a unique keyboard for the musician who’s got to take their instrument everywhere they go. The Infinite Response Vax 77 is designed to fold in half so it can fit in the overhead compartment on airplanes. 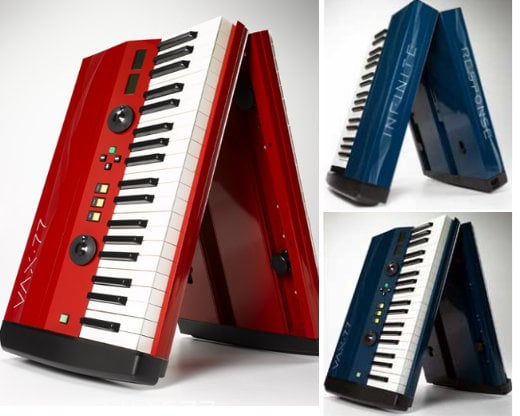 Once folded in two, the keyboard measures in at just 23.3″ (w) x 14.5″ (l), which should fall below the FAA regulation carry-on size, assuming it’s less than about 7-inches thick when it’s in its carrying bag. The Vax 77 weighs in at about 25 pounds, which should make it a bit easier to haul around than other keyboards, which usually weigh around twice as much.

The keyboard features 76 weighted keys and can control any MIDI or USB connected synthesizer module. The keyboard can pass all kinds of detailed data about key presses to a sound module including pressure, attack and release velocity. It even offers what’s considered a holy grail in electronic keyboards, polyphonic aftertouch.

Once released, each Vax 77 will be custom made to order, and buyers can choose from several colors as well as the weighting of your keys. Pricing hasn’t been announced yet, but the makers of the keyboard hope to keep the price in reach for working musicians, whatever that means.

If they figure out how to fold up a baby grand piano, I’ll buy one.