Wanna play your video games on a massive screen, but don’t have thousands of dollars to spend on a huge flat screen? This new projector from InFocus lets you play games and movies at sizes between 40-inches and 210-inches diagonal for under $500. 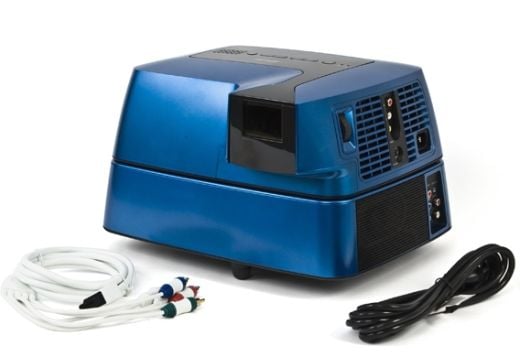 The InFocus Play Big IN1 gaming projector is powered by a TI DLP chipset, and easily connects to your gaming console or DVD player to crank out huge, reasonably bright images. So what’s the catch? In this era of high-definition video, the native resolution of the projector is only 640×480 (VGA). Sure, it’ll accept a 720p or 1080i/p signal, but it’s all down-rezzed to 480p. It’s got connectors for S-Video, component and composite video, but there’s no HDMI or DVI inputs at all.

While the projector isn’t ideal for HD sources like the Xbox 360 or PS3, it is a perfect match for the Nintendo Wii, which doesn’t output high-def. Heck, InFocus even includes a Wii component cable to make it super simple to get up and going with the popular Nintendo console. The funky-looking trapezoidal projector even has a built-in stereo sound system, so other than a projection surface, it’s entirely self-contained.

Even though the IN1 can project images up to 210-inches diagonal. However, at that size I’m betting the 500-lumen output won’t be sufficient for anything but a really dim picture in a really dark room. On the other hand, it should be plenty bright at anything under 100-inches. As is always the case with front projection, I’d recommend a light-controlled environment.

So if you’re looking for a huge picture on a not-so-huge budget, the Play Big IN1 is worth a look. It’s available for $499 exclusively from Woot.