Remember the wine-tasting robot that mistook people for bacon? Well I guess they’ve worked out some of the kinks, since the pint-sized automaton with a taste for the finer things is back — this time in the Guinness World Records. 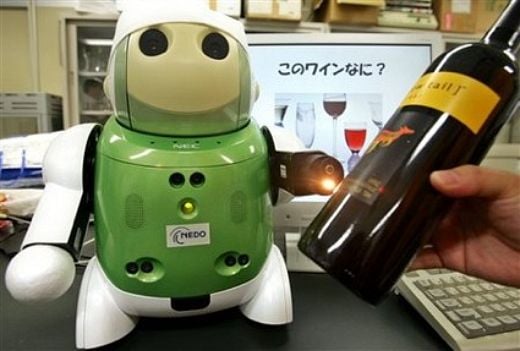 NEC’s Tasting Robot has achieved the unique distinction of the “world’s first robot sommelier” in the 2008 book of records. The robot is designed to be able to quickly determine the flavors and composition of a bottle of wine using its internal “taste” sensors. I’d still like to see it distinguish the finer points between a bottles of MD 20/20 , Night Train and Thunderbird.

I find it kind of ironic that a wine-tasting robot would make the Guinness Book. Shouldn’t it be a beer-tasting robot?

[via Daily Yomiuri via DVICE]