If you’ve got a really cruel streak, here’s a new prank for your arsenal of practical jokes. This may look like an ordinary car keychain remote, but it won’t actually open any vehicle. Instead, it lets out a tiny jolt of electricity when your unsuspecting victim presses the wrong button. 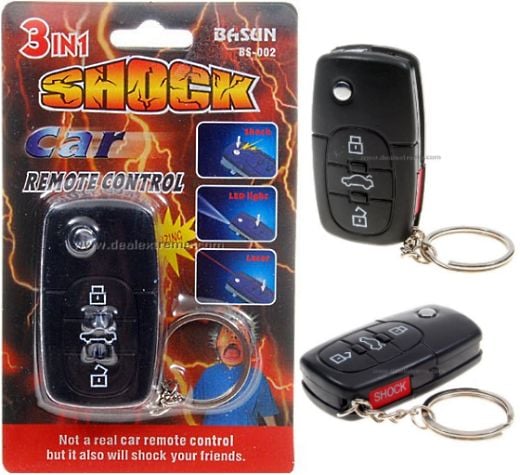 The thing that makes me a bit nervous about this gag is that the company who makes them says there’s a laser pointer built into it, but it’s broken out of the box. There’s a hole and a button for the beam, but they don’t seem to do anything. Ah… nothing like quality control. I figure if they’re able to make that kind of glaring mistake, what’s the likelihood they got the amperage correct so you just annoy your buddies, rather than send them to an untimely demise.

If you’re willing to take a gamble, you can pick up a pair of these from DealExtreme for the appropriately oddball price of $5.52 USD.