Whether you’re literally joined at the hip to your brother or sister, or you and your significant other are just inseparable, have I got an iPod dock for you. I guess that JVC has decided that the market for the multiple iPod household is growing enough to warrant the creation of this two-headed beast. 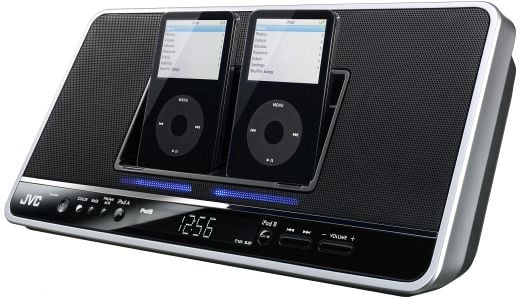 The NX-PN7 is capable not only of docking and charging two iPods simultaneously, but you can decide which one you want to play your tunes from. In addition to the two iPod sound sources, the dock offers an AM/FM tuner and an AUX input. There’s also as clock and timer functionality, which makes it perfect on the kitchen counter. The dock also includes a wireless remote, with full control over playback.

Even though the dock holds two iPods, JVC managed to pack the whole thing into a box that’s just 13-inches wide. The clean black and silver case design also features a cool little flourish that lets you change the colors of illumination below each player to one of nine different hues.