Music Sequencer has Balls of Steel

Here’s an interesting new tangible interface design for a music sequencer. Rather than using an array of buttons or a 2-dimensional control screen on a computer, this one generates rhythmic patterns using ball bearings. 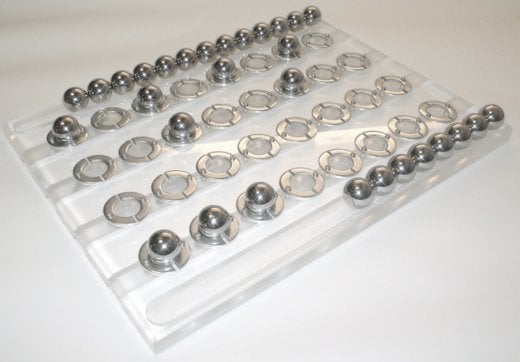 Sequences are composed by placing the metal orbs in a grid of receptor cups which represent the different rhythm tracks (kick, snare, hi-hat and cowbell) along the vertical axis, and beats along the horizontal.

The BeatBearing sequencer interface was designed by Peter Bennett, a researcher studying for his Doctorate at the Sonic Arts Research Center in Belfast. Peter’s thesis studies have been focused on new interaction techniques for digital musical instruments.

It’s an elegant interface solution for music sequencing, but I’d be afraid I’d lose half the ball bearings by the second night of the tour. Peter gets extra credit for including a cowbell track, since I’ve got a fever… and the only prescription is more cowbell.