After much speculation and hype, Apple today announced their new ultra-slim laptop, the MacBook Air. Measuring just 0.16″ to 0.76″ thick (when closed), the 3-pound machine is touted as the “world’s thinnest laptop”. 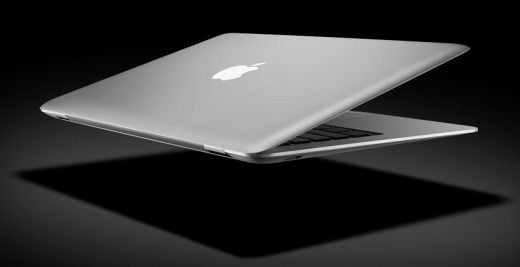 The new MacBook Air features a striking aluminum case design, and is skinny enough to fit inside of a standard manilla envelope. To put it’s size in perspective, the iPhone is about 0.45″ thick, so the average thickness of the MacBook Air is virtually the same as the iPhone.

In addition to its gorgeous exterior, the Air features a 13.3-inch widescreen (1280×800) display with LED backlighting, which minimizes power consumption, as well as providing an instant-on picture when the lid is opened. 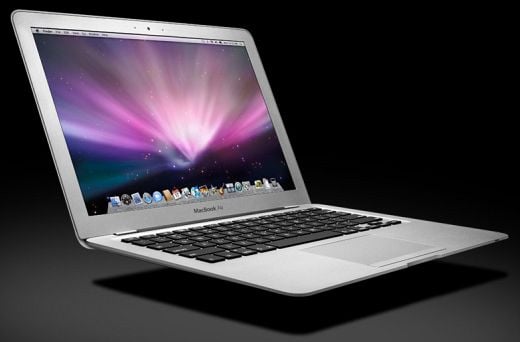 Despite its slim form-factor, the MacBook Air manages to include a full-size keyboard, with solid tactile feedback. What’s super-cool is the fact that the keyboard offers backlighting which automatically turns on in darkened locations. There’s also a huge trackpad that’s the first to offer multi-touch capabilities similar to those found on the iPhone. Apple also managed to squeeze in a built in iSight camera for online video chat sessions. 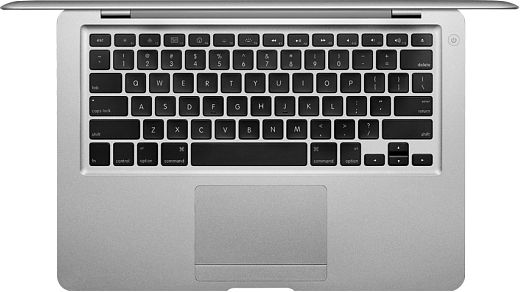 The system runs on a brand new Intel Core 2 Duo processor, available in either a 1.6GHz or 1.8GHz speeds. In order to cram all those brains into such a tiny body, Apple worked with Intel to shrink the size of the processor by about 60% from previous models. Both models include 2GB of RAM, which does not appear to be expandable at this point. 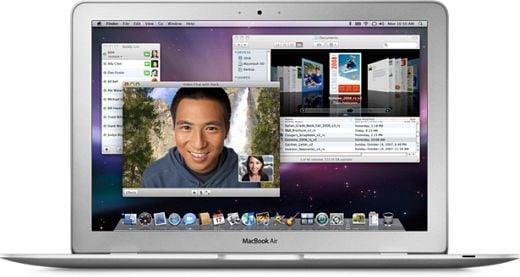 Battery life is rated at 5 hours, with Wi-Fi active, but in order to keep things thin, the battery is built in and not user-replaceable (let’s hope these batteries last a really long time). Connectivity includes 802.11n wireless, Bluetooth 2.1 + EDR (Enhanced Data Rate), a single USB 2.0 port and a micro-DVI connector for hooking up an external monitor. Apple also left out the DVD drive to help lighten the load. If you must use CDs or DVDs, you can either pick up a $99 external DVD burner (the Air SuperDrive), or mount discs wirelessly from another computer.

Pricing for the MacBook Air starts at $1799 for the base model with a 1.6GHz CPU and an 80GB hard drive. For an additional $1300, you can upgrade to a 1.8GHz CPU and a super-speedy 64GB solid state drive, but the $3098 price tag makes that model cost-prohibitive. Apple is taking pre-orders now, and they should start shipping orders by 1/31/2008.