I’ll start out by saying that I’ve always enjoyed the Star Wars franchise (except for the Ewoks and Jar Jar), but I’ve never as nuts about the series as say, that girl on American Idol last night who showed up for the audition wearing a Princess Leia outfit, hair buns and all. These lightsaber lighting fixtures are made for her and for those who follow in her footsteps. 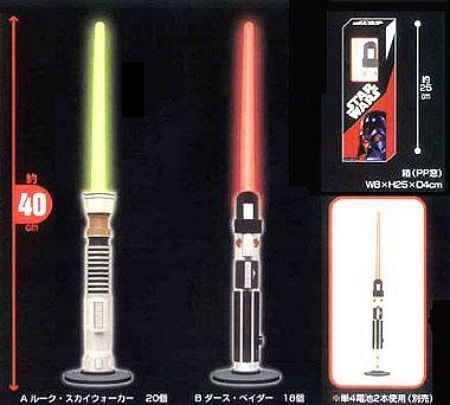 Sure, these aren’t the most beautiful lights you’ll ever lay your eyes on, but they are perfect for serious Star Wars junkies. They’re not fancy, running on AAA batteries, and emanating a subtle LED glow. They come in both green (Jedi) and red (Sith) variants, but no matter which one you choose, they’ll each bring a bit of the Light Side to your dark room. The sabers measure in at just under 16-inches tall, making them good for a bedside table, or on either side of your couch.

They’re available now from NCSX for $23 each.