Too Cheap to Buy a PS3 Dualshock Controller?

This strange appendage snaps on to the bottom of your standard PlayStation 3 SIXAXIS joystick, turning it into a poor-man’s DualShock controller. 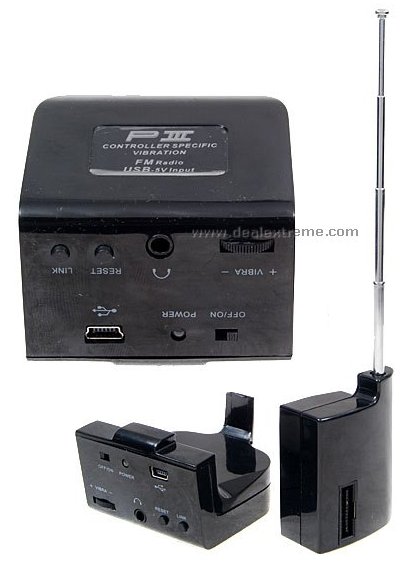 PEGA’s oddly-named “Vibrating Bag” adds rumble capability to your stock PS3 controller. Now they don’t specify if the vibration actually works when the game generates its feedback signal, or if the thing just continuously rumbles. But couldn’t your tired hands use a relaxing massage anyway?

In addition to adding some unwelcome bulk to the controller, the remote receiver that plugs into the console has a huge antenna sticking out of it, messing with your PS3’s sleek good looks.

If the contraption wasn’t off-kilter enough, it also has a built-in FM radio – ’cause there’s not thing I like to do more while playing a round of Uncharted than cranking up the Boomer and the Nudge morning show.

So if you really, really can’t bear to spend the bucks on a proper PS3 DualShock Controller

, head on over to DealExtreme and take your chances.