Back in the day, I did my stint designing lighting and sets for community theater companies, so I’ve seen more than my share of wooden acting. But this is the first time I’ve ever seen metal acting. 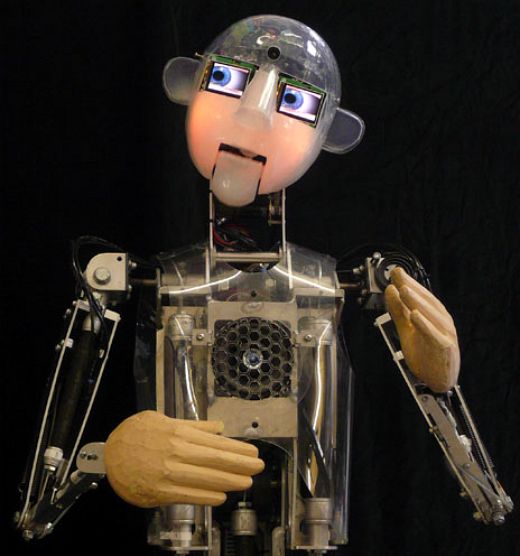 The RoboThespian is a life-sized robotic puppet, designed with one mission in mind — to entertain. Created by UK interactive exhibit builder Engineered Arts, the robot can do spoken parts, singing, story telling, and even some dance maneuvers. Now sit back and enjoy as RoboSapien performs some classic movie moments.

Here he is doing his DeNiro:

And no robot act would be complete without some Aaahnold:

How about a little salty old Robert Shaw from Jaws:

RoboThespian does his best C3P0:

I like to think this is a scene from A Clockwork Orange:

While RoboThespian won’t be winning an Oscar anytime soon, he’s might be good enough to pull off a People’s Choice or a Golden Globe.

If you happen to live in the UK, you should be able to check out some of these guys performing at The Eden Project in Cornwall. Otherwise, Engineered Arts rents and sells these robots for use in special events, museums and entertainment facilities, so you might run into one the next time you head out to get some some culture.