While there’s still no official word from Nintendo on anything but white Wii-motes, there is now a third-party option for those of you bored with the standard-issue models. 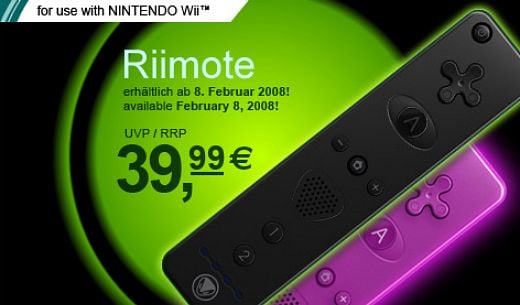 Snakebyte is one of the first companies to offer a third-party substitute for the Wii-mote (called the Riimote), and will be offering them in colors not offered by Nintendo. Functionally, these controllers look pretty much identical to the authentic Wii-motes, although the button designs are a little more modern in styling. The initial models will come in either a gloss black or a dramatic bright purple, which really jumped out at me when I first saw it. They should be available for purchase early in February.

Unfortunately, it looks like Snakebyte hasn’t been able to get their costs down to what Nintendo has since they’re not producing as many, so the price of €39.99 (appx. $59 USD), is a bit hard to stomach. That’s too bad, since they do look really cool.

[UPDATE: Nintendo Wii Fanboy has posted a number of additional photos of the Riimote and matching Nunchuks.]