Sometimes it’s a bit of a challenge to tell the exact time on an analog clock. Sure, you can say “it’s about quarter-to-three”, but it really might be 2:47. This intricate wall clock tries to solve that problem by displaying every individual minute as a separate point on the dial. 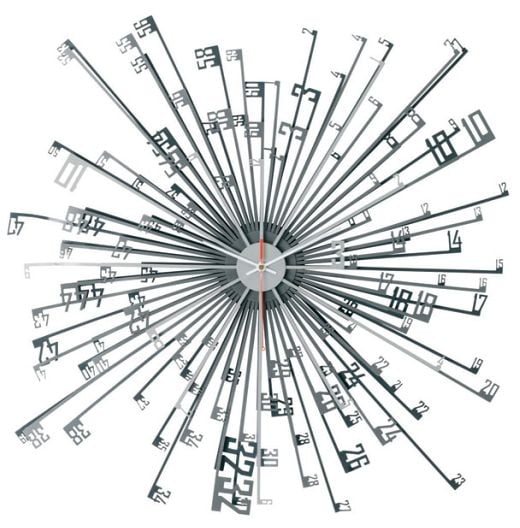 Looking like a cross between a clock and a Sputnik satellite, the TikTak clock by Dutch designers Niels van Eijk and Miriam van der Lubbe makes a strong visual statement. Each number on the dial is represented by at one or more metal arms with digits of varying sizes hanging on their ends. Numbers are arranged in interleaved layers of powdercoated metal in varying shades of grey to create depth, while a red second hand really stands out when in motion.

While it’s a bit overwhelming to read, I do really dig the clock’s retro-modern design sensibility. The substantial timepiece measures almost 24-inches in diameter, making it a bold addition to any wall. You can find the TikTak clock at Habitat UK for £89.00 (appx. $177 USD).