Throw Your Monitor at Game Opponents

Ever had such a bad game that you wanted to throw your controller at your TV screen? How about a gaming system where chucking your display itself is an integral part of the action? 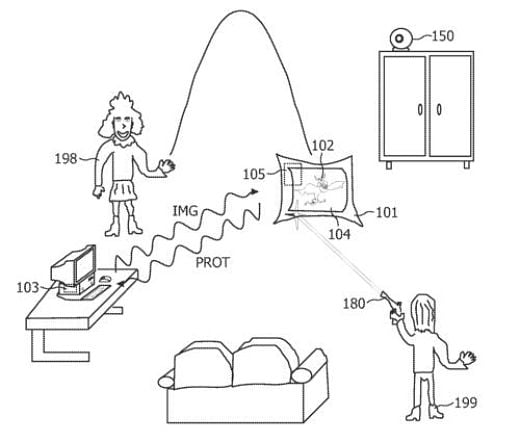 Philips recently filed a patent application for a video game system which uses a monitor that you can actually toss. The patent describes a durable, monitor which which can show images as it’s thrown around the room. A stationary sensor tracks the position of the ball as it moves, while player positions are tracked using ultrasound. The display can then display images that respond to its movements and position within the space. The patent, entitled simply “Gaming System with Movable Display,” begins:

At this point, plans for an actual implementation are sketchy, but one could envision games in which the images on the moving screen could react to the players in the room. Imagine hitting the ball hard, and the display showing an image of a screaming face, or one mocking your opponent when it flies past an imaginary goal line.

The concept is still a little strange, and it seems to me that most of what’s described could be achieved with a combination of accelerometers and infrared sensors (like Nintendo’s Wii-mote). Still, I’m always intrigued by new and different ways to interact with games.

Can you guys think of some other good game ideas for a system like this one?