Anti Pac-Man: You Control the Ghosts

Here’s an interesting concept, what if Pac-Man’s gameplay were the exact opposite of what you’ve come to expect after all these years. That is to say, what if, instead of Pac-Man being chased by ghosts, you controlled the ghosts and Pac-Man came after you. That’s exactly the idea of this new Flash game called “Anti Pac-Man”. 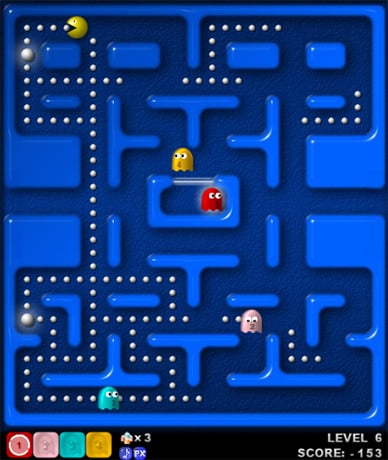 The concept is simple. Think of it like a squad based version of Pac-Man. Use the keys numbered 1 through 4 to take command of each ghost, then use the arrow keys to guide them away from your yellow dot-gobbling nemesis. As Pac-Man eats up, your score keeps going down, but if you can keep your ghosts alive, you can minimize the damage.

Maybe it’s the annoying loop of the Pac-Man theme that plays over and over again, but I find the whole thing a bit unsettling. You be the judge and check it out for yourself over at Sugar Free Games.