Guitar Hero: Get in My Pocket!

Can’t get enough Guitar Hero? Well now you can carry a miniature version of the game anywhere you go. The 7 ¾” X 3” guitar is small enough to easily carry around in your backpack, but the neck folds down so you can even fit it in your pocket. 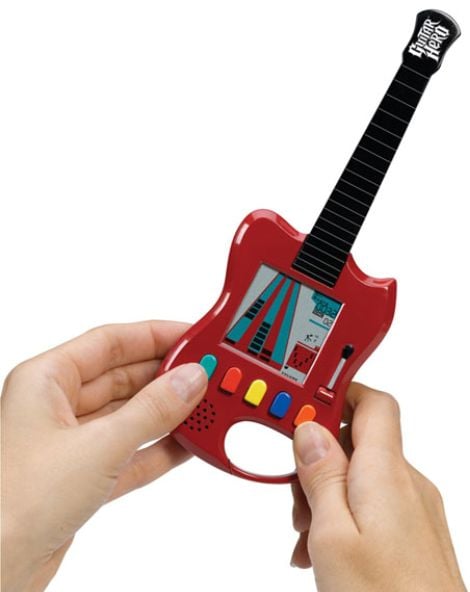 Basic Fun’s pint-sized Guitar Hero Caribiner game offers up a variety of rock tunes from both Guitar Hero I and II, including Smoke on the Water, Rock this Town, Cherry Pie, Killer Queen, You’ve Got Another Thing Comin’, Miserlou, Heart Shaped Box, Message in a Bottle, Jessica, and Surrender. An LCD screen displays the notes required, and you simply tap on the color-coded buttons when you’re ready to jam. There’s even a miniature version of the all-important “whammy bar” so you can give your music some extra finesse.

The guys at Basic Fun worked closely with the game’s original developers at Activision and Red Octane to ensure the tiny game captures the spirit of the original.

Expect the pocket Guitar Hero Caribiner to hit major retailers such as Target, KB Toys and Toys ‘R’ Us by early March for just $14.99.