Rock Band on Your iPod, Sorta.

Now you’ll notice that I didn’t say you could PLAY Rock Band on your iPod. But if you’re willing to shell out some serious dough, you can now pick up the entire library of tracks from the hit game over in the Apple iTunes store. 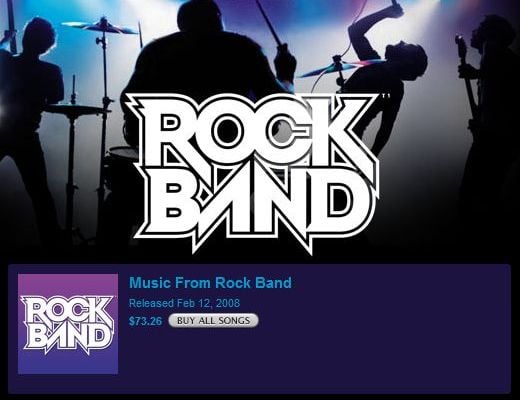 There are currently 74 tracks available in the collection, and at 99 cents each, you’re looking at a whopping $73.26 to pick up the entire set. It’s the perfect way to memorize all the tunes while you’re riding the bus to work so you can defeat your online foes in a blaze of glory over the weekend.

Keep in mind that the iTunes track list isn’t an exact match for the game. For instance, tracks which are cover versions in the game are done by the original artist on iTunes (too bad they’re not that way in the game). There are a handful of other disparities too, but not enough to take away from the sheer awesomeness of the one-stop-shop library.

If you happen to have iTunes installed, you can check out the entire collection here.