Here’s a gaming oddity from Japan. Falling somewhere between Tetris and Rock Band, Pop ‘N Music Be Mouse is a Windows PC game that comes with a colorful multi-button mouse for controlling the gameplay. 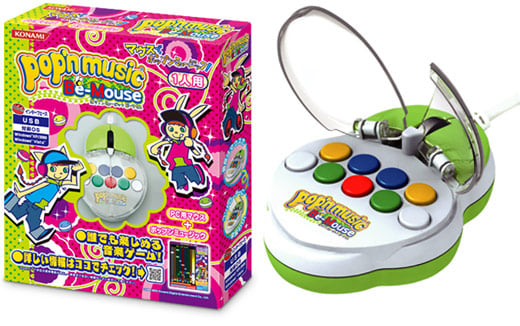 To play Konami’s music pattern matching game, pop open the ladybug-like wings on the Be-Mouse controller to access the game’s nine buttons. As the colored indicators fall down the screen, you tap frantically on the buttons to keep up with the music.

It plays out much like the chord pattern interface on Guitar Hero and other familiar music games. While you might think it’s just another GH clone, it’s actually based on the popular Japanese Pop ‘N Music arcade series which dates all the way back to 1998.

While you can use the mouse for other computer activities, it’s a bit unwieldy for most things. I certainly can’t imagine using this thing to navigate around Excel spreadsheets, but to each his own, I suppose. Importer Play-Asia is now taking orders for the game and controller package for $69.90.