Sure, you’ve played the Wii, the PS3 and the Xbox 360, but now your favorite feline friend can get into the action thanks to the latest in video gaming technology — the CatBox 360. 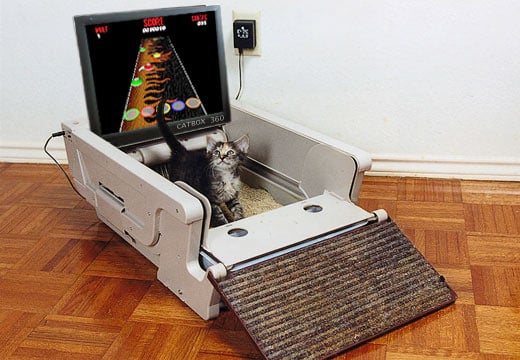 Each time kitty steps into the automatic litter box, a new game is activated and a random music track starts to play. Colored indicators scroll down the flip-out LCD screen much like they do in a game of Guitar Hero or Rock Band. As each paw scratches across the litter, it triggers the notes, and every time your cat leaves a “present” in the litter box, the game enters a bonus multiplier mode for extra points.

The system includes such cat-friendly tunes as Cat Scratch Fever, Stray Cat Strut, and of course, Cool for Cats.

The makers of the CatBox, Pawsitivity Games, say they’ve tested the device with hundreds of cats. With time, most of them do start to scratch to the rhythm of the music. An unfortunate side effect, however, is that a handful of cats have started “doing their business” any time they hear music playing — so beware when you crank up your stereo — you might get an unexpected surprise. Hopefully, they’ll work out this minor kink before the CatBox hits the market.

Pawsitivity hasn’t announced a release date or price for the system yet, but my cat can’t wait to get his paws on one.