Do you hate most of your neighbors like I do? I was hoping to get my hands on that paintball-firing robot so I could deal with them, but it turned out that was a one-of-a-kind deal. So it gave me a little thrill when I realized I could surround my property with an arsenal of remote-controlled paintball turrets to keep them at bay. 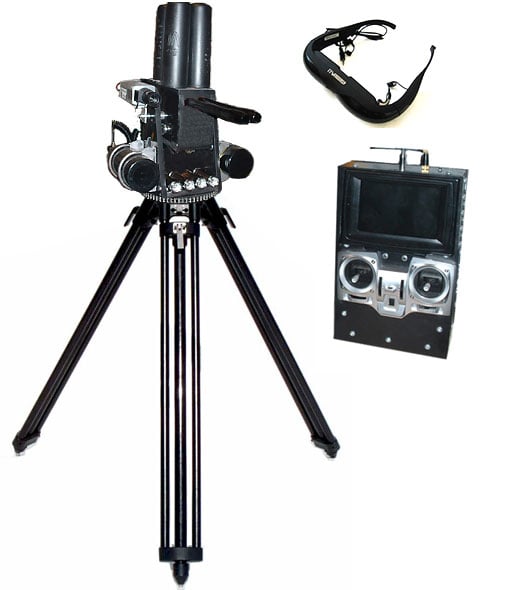 These wireless paintball turrets are just what the doctor ordered when it comes to taking out your aggressions from afar. The EMT Wireless Paintball Sentry Turret comes with everything you need to send paintball pellets flying while you sit safely in your living room (or behind a bunker). While it’s designed primarily for use by scenario-based paintball enthusiasts, I don’t see any reason you couldn’t put one in your cubicle at work.

The $1959 setup includes the paintball turret, a substantial tripod base, CO2 tanks, a color CCD camera with video transmitter and a wireless remote with a nice little 3.5-inch monitor (or a 7.5-inch upgrade pictured above) so you can aim at your unsuspecting victims. The controller’s joysticks pan and tilt the turret, and can fire up to 400 paintballs with the push of a button. The whole rig runs on rechargeable batteries and CO2, so you can use it anywhere (although there is a slight up-charge for weatherproofing).

Upgrades include a high resolution camera ($299), virtual big-screen goggles ($429), a 1000-ball hopper ($189) and other custom quoted options such as a night-vision scope, extended range transmitter and more.

[Two grand too rich for your blood? Be sure to check out the wired version of the turret, which costs a measly $1399.]