Musicians who want to use their iPods as an audio source now can easily do so, thanks to this handy new audio mixer with a built-in iPod dock. 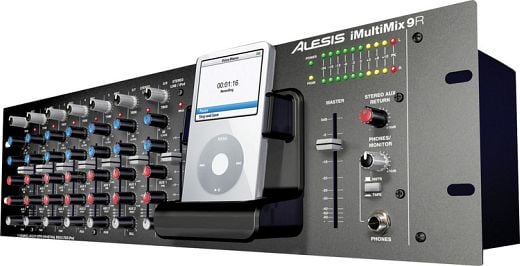 Alesis new iMultiMix 9R is a rack-mountable audio mixer which can combine up to five different audio sources into a single set of stereo outputs. While it’s not the world’s fanciest mixer, it offers convenient docking and integration of your iPod as both an audio and video source.

In addition to basic audio mixing, the iMultiMix 9R gives you 2-band equalization for each channel, letting you precisely adjust the tone of each source prior to mix-down. While I probably wouldn’t try and run a recording studio with this thing, it’s capable enough for a lo-fi musical act or a small venue. It’s especially convenient if you want to incorporate music on the iPod as a backing track or to incorporate lo-res multimedia into a performance (thanks to its video outputs).

If you need a convenient way to mix audio, and your iPod is one of your sources, it’s well worth a listen. You can get your hands on the iMultiMix 9R at Sweetwater Audio for just under $300.