Zvbox: Puts Your Pc on All Your Hdtvs

Hot off the press this morning is the ZvBox from ZeeVee. The box is a PC-to-TV video gadget that lets you send any and all video content on your PC to any digital, cable-connected TV in your home. 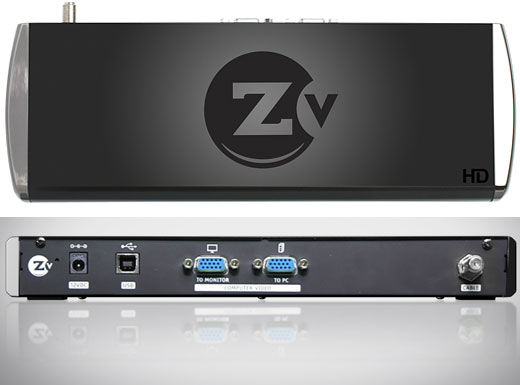 By using a technique ZeeVee calls “localcasting”, the ZvBox uses your current in-house cable TV network to send the signal to all of your sets. Just plug the ZvBox in between your computer and any open wall jack on your cable line (or splice it into an existing cable), and the system detects an open channel to send content over. Your PC signal simply becomes a new channel on your TV. The box converts the VGA output of your PC into a digital HDTV channel (using real-time MPEG2 compression) and injects it into your cable signal. The signal can even include Dolby 5.1 digital surround sound if the original video supports that format. (I’m assuming that audio somehow flows through the ZvBox’s USB port.)

To connect to each TV, just place a coax splitter (included) between the wall jack and your cable box. One side of the split goes back into the cable box, and the other goes directly into your TV’s RF input. Flip to the proper input on your TV, and voila, high-def computer video on any set in the house with a digital (QAM) tuner. At this point, it looks like the signal will only work alongside cable television, as satellite signals interfere with the Zv localcast channel. Hopefully, they’ll find a solution for those of us with DirecTV or Dish at some point. I’m also a bit surprised that the PC video inputs on the box are VGA – not DVI – so your source signal won’t be digital.

Once connected, any video that’s available on your computer can be viewed on your TV, retaining the the high-def resolution of the original content. The system also ships with a special widescreen menu application called Zviewer, which provides big-screen optimized navigation of all your media. 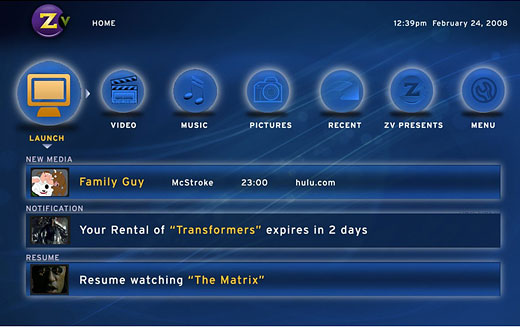 Also included in the box is the ZvRemote, which lets you control your computer’s mouse and desktop interface from up to 150 feet away. As an added bonus, you can access any application on your PC from the convenience of your couch.

Of course, the real “secret sauce” here is that a single ZvBox can send its signal to all of your TVs, so you only need one for the whole house. Plus, you won’t need to do any new wiring, assuming you’re already set up for cable TV, and you’ve got a cable jack somewhere near your PC.

The ZvBox, including the ZvRemote and Zviewer application will retail for $499 when it ships this June. More product information will be available at www.zeevee.com.